The Northern Virginia data center real-estate frenzy got even hotter a week ago, when Digital Realty Trust announced a purchase of a sprawling, 424-acre plot next to the Washington Dulles International Airport.

Already the biggest data center landlord in the area – by far the world’s largest computing real estate market – Digital now has plenty of runway for further expansion in a market where suitable land for data center construction has gotten extremely tight.

Attracted by the huge amount of networks interconnecting in Northern Virginia’s data centers, relatively low utility rates, and business-friendly local officials, hyperscale cloud platforms have been flocking to the region in recent years, bringing along billions in investment in construction by the likes of Digital, landlords eager to secure large-capacity, long-term leases with some of the world’s richest, most credit-worthy tenants – the likes of Amazon, Facebook, Google, and Microsoft.

According to a recent Jones Lang LaSalle market report, net absorption of 166MW of data center capacity during the first half of 2018 smashed all previous leasing records. That’s more than full-year absorption of 115MW in Northern Virginia in 2017 – a record year prior to now.

Needless to say, there are even fewer now, as existing players (including Digital Realty, which now also owns the former DuPont Fabros Technology campus in Ashburn; Equinix, CyrusOne, RagingWire, CoreSite, Infomart, and Sabey) expanded in the market and new ones entered.

About 1,700 acres were purchased in the market for data center use between 2011 and August 2017, Sandin told us. In 2015, there was still plenty of land near the original Equinix campus available for purchase: 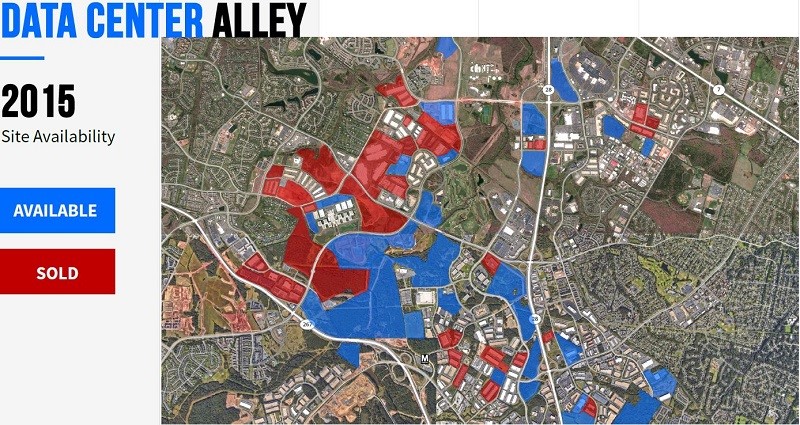 Here’s what the map of the same area looks like today: 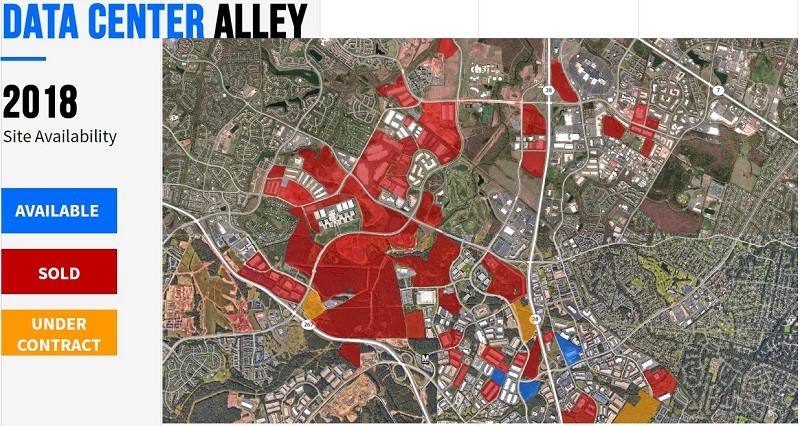 From August 2017 through September 2018, over 1,500 acres were purchased in Northern Virginia, according to Sandin. That’s not including Digital realty’s recent 424-acre buy.

“As land prices surge due to a dwindling supply of undeveloped land, Loudoun County continues to cultivate a welcoming environment for data centers,” Sandin said. Those efforts include a recent move to approve three- and four-story data center developments. “This will open a whole new supply of opportunities in Data Center Alley.”

In just a year’s time, about 2,000 acres of Northern Virginia land suitable for data centers has been purchased or is under contract. This includes Loudoun and Prince William Counties and nearby properties. The most expensive land is in Ashburn adjacent to the original Equinix campus, the carrier-neutral connectivity hub that put Loudoun County on the map 20 years ago. 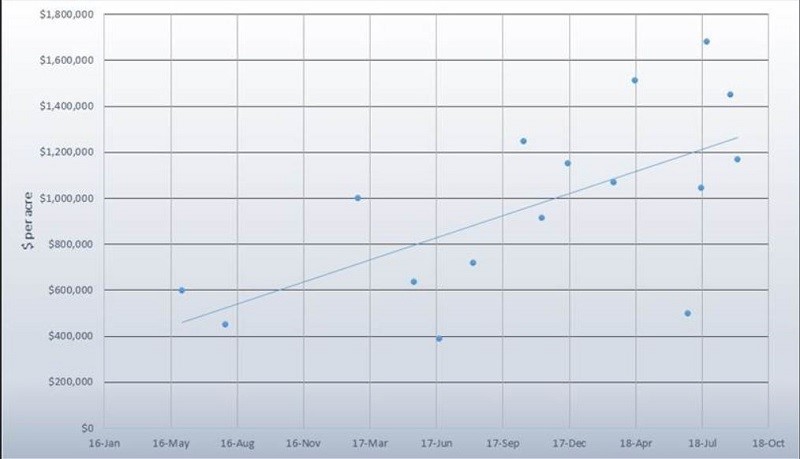 As Ashburn becomes more and more expensive, nearby Prince William County has emerged as an important pin in the map. Digital Realty, for example, bought 62 acres in Manassas in June at just $261,000 per acre.

Besides inventory of cheaper land that’s not far from Ashburn, Prince William gives hyperscale platforms a location for redundant availability zones in the same region. A data center in Prince William can work in tandem with one in Ashburn, one taking over for the other in case of an outage.

The hyperscale leases are becoming exponentially larger and longer (now 10 to 15 years). The ability to win deals and sign leases in such a competitive environment is increasingly dependent on existing relationships, financial strength, operational excellence, and having the right product available, along with a contractual guarantee for room to expand. That last factor now plays an outsize role in a data center developer’s ability to win hyperscale deals.