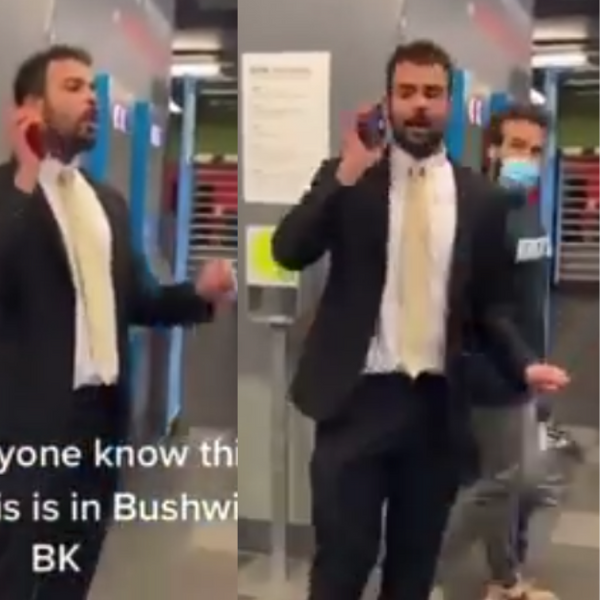 Yet another real estate agent learned the hard way earlier this week that it’s not okay to be racist.

A realtor of Century 21 in Brooklyn, New York, who has since been identified as Edward Rodriguez, was fired from his position after he verbally assaulted a gym manager at Blink Fitness in the Bushwick neighborhood.

A video went viral on TikTok of the last moments of a confrontation when a man in a tailored suit yelled at the Asian gym manager and told him repeatedly:

You can watch the video here:

Prior to the filming of the video, according to the videographer, the man basically threw a tantrum.

“He threw his mask on the floor and proceeded to be extremely racist to the manager, who is, by the way, the nicest man.”

In the video, we see the man making grand gestures with his hands and throwing them up in the air.

At the end of the video, Rodriguez says:

“Go back to China. That’s what you need to do.”

This all started because he did not want to wear his mask while inside the gym.

After the incident, an acquaintance of the gym manager, Yang Chen, shared the TikTok video on Twitter in an effort to raise awareness.

Chen said he has been the recipient of racist attacks and believes anti-Asian crimes are on the rise. He wanted to share the effort in an effort to show that it’s a real problem, while also supporting his friend.

“I can vouch that he is a very kind and generous man who would never go out of his way to hurt somebody.”

“He deals with everything in a professional manner.”

“So when I saw this video, I did not need to know the background story to figure out that he was in the right…”

“I want people to know that these forms of hate crimes aren’t always made public. In fact, I’ve had people verbally harass me on the trains and even attempt to spit on me due to the fact that I was Asian.”

Chen’s reposting of the video quickly went viral, so much so that he had to take the post down after receiving a long stream of retweets and private messages.

What is so wrong with people that they feel the need to do this to others?

So sad, I think being racist is not the way to get things right.

The video was also shared to Instagram by “Asians with Attitude” (AWA), where people have loudly spoke up against Rodriguez’s behavior, as well.

In a new tweet, Yang was happy to report Century 21 responded and Rodriguez was fired.

“We wanted to let you know that the affiliated Century 21 office has terminated this agent.”

“We do not take this behavior lightly and will always work to ensure that we are properly addressing this type of behavior across Century 21 and our independent brokers’ offices.”

Thank you everyone! I’ve taken down my original post due to the amount of dms I’ve been getting (I get anxiety when… https://t.co/JjBnMv8qwF

Blink Fitness spoke up, as well.

“At Blink Fitness, we applaud the professionalism our employee showed in the face of such a blatant racist attack.”

“Our gyms are founded on the idea of bringing fitness to everybody, and the comments by the individual featured in this video in no way represent the views of Blink Fitness or the diversity and inclusivity that we value at our gyms.”

“Blink Fitness stands in solidarity with the ‘Stop Asian Hate’ movement and will continue to support our employees and members of color in creating a respectful, welcoming environment.”

“We do not and will not tolerate displays of racism or hatred in any of our gyms.”

It’s wonderful to see both of these companies speaking up about racism and hatred, and actively doing something about the person who displayed racist behavior.

Though not occurring in the same group each time, the real estate field seems to be taking a serious hit right now with racist employees. Just last month, Mike Dalcin, a California realtor of Beach City Brokers, was fired from his position after verbally assaulting an Asian woman while she was out on a walk.

You would think everyone would understand racism is unacceptable.

But in 2021, it seems the last few years of racism and White supremacy being embraced repeatedly by leaders in the United States had a lasting negative impact on public behavior.