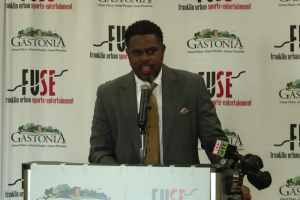 The CEO of a real estate and development company headquartered in Maryland has become the only Black majority owner of any professional baseball team in the U.S.

Brandon Bellamy, the chief executive officer of Velocity Cos., based in Prince George’s County, will become the owner of a new, yet-to-be-named expansion baseball club in Gastonia, North Carolina. The team will play in the Atlantic League of Professional Baseball.

The City of Gastonia announced the agreement Tuesday during a press conference at the Gastonia Conference Center.

“It is especially moving to me to be able to bring a team to North Carolina not that far away from where my dad grew up,” Bellamy told QCity Metro Tuesday.

Bellamy’s baseball team, which has not been named yet, will join the Atlantic League lineup next spring for the 2021 season and play in Gastonia’s 5,000-seat multipurpose ballpark once construction is completed.

According to city officials, the team’s stadium will anchor the overarching 16-acre Franklin Urban Sports and Entertainment (FUSE) District, which broke ground in downtown Gastonia last October. Bellamy’s company Velocity will manage the ballpark and collaborate on economic development projects tied to the stadium, including residential, retail, hotel, and office space properties.

Gastonia Mayor Walker Reid III said the agreement is a milestone for the city.

“This is a milestone for our city and an example of how public-private partnerships can revitalize a community, proving to be beneficial for everyone,” Reid said.

During the conference, Bellamy also commented on the status of being a majority Black baseball team owner.

“I believe in hope, opportunity, inspiration, period,” he said. “So before you ask me questions like that, if you are struggling with anything in your life and you need a push or some encouragement, and you get that from my story, then I’m for you. It doesn’t matter what you look like.”

A bevy of professional sports leagues have made efforts this summer to add diversity to their front offices. Earlier this month, Jason Wright became the first Black man to hold the position of team president for an NFL franchise. In June, Xavier Gutierrez became the NHL’s first Latino CEO for the Arizona Coyotes. Also, Brandon Thompson became the first person appointed to the newly created position of Vice President for Diversity and Inclusion for NASCAR.