Socialists Denounced as Foes and Tools of Real Estate Industry 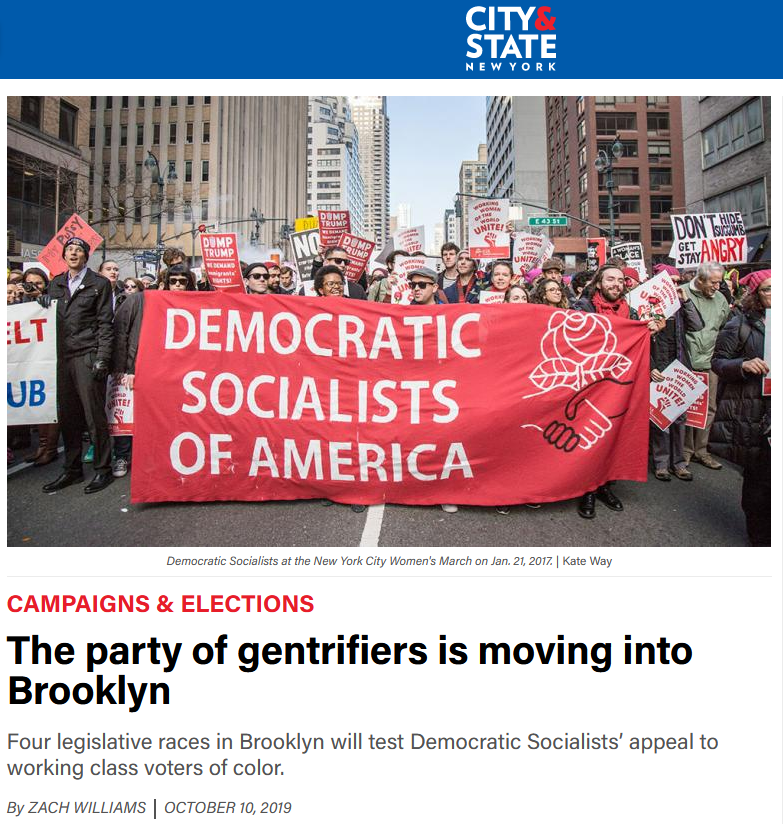 City & State (10/10/19) describes DSA as “centered on the yuppies and hipsters who have typically grown up in the suburbs and more recently moved into these [urban] neighborhoods after college. “

When Jamaal Bowman of New York and Cori Bush of Missouri, candidates endorsed by the Democratic Socialists of America, joined the congressional “Squad” (Independent, 11/4/20), it was more evidence that the small socialist voting bloc wasn’t simply left-wing, but racially diverse—with two new Black members joining two other African American representatives (one a Somali immigrant), a Puerto Rican and a Palestinian American.

Looking at socialist victories in New York state politics this year, we again see a crop of newly elected officials that represent a real rainbow coalition with a working-class message created to cut across racial boundaries (The Nation, 12/22/20). (Disclosure: This writer is a member of DSA in New York City.)

And yet, over and over again, corporate media repeat the accusation from establishment Democrats and conservatives that the ascendant socialist movement is made up of “gentrifiers.” Far from representing the toiling masses, the theme goes, today’s socialists are white, well-off interlopers, sipping their lattes while reading Karl Marx at the coffeeshop that pushed out the neighborhood bodega.

Rep. Hakeem Jeffries, the House Democratic Caucus chair, told the New York Times (12/23/20) that socialist politics were ascending “particularly in neighborhoods where Black and Latino residents are being gentrified out of existence,” and that the “socialist left is in part tied to gentrifying neighborhoods,” and thus marginal in citywide politics.

This is hardly the first time anti-socialist Democrats in New York have used the gentrifier label against electoral insurgents, and had the label unquestioned in the media. Politico (11/13/20) was one of many publications to repeat a claim by city lawmaker Laurie Cumbo that socialist challengers were agents of gentrification, having earlier written (8/8/19) that “political insiders say gentrification has played a role” in socialism’s electoral success, because it is “ushering in younger, white voters that skew more liberal than traditional homeowners.”

City and State (10/10/19), which covers local and state politics around the country, likewise used the gentrification claim against DSA, saying that blue-collar voters had “suspicion of the white people with canvas New Yorker magazine tote bags who arrived in the neighborhood five years ago and now seek to change its political leadership.” 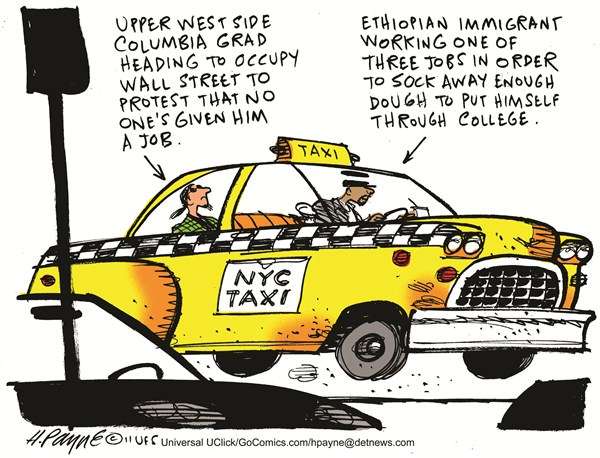 The claim that socialists and progressives represent elite culture and are untethered to the working-class has been long a common one in right-wing media. Recall, for example, a cartoon in the libertarian magazine Reason (12/2/11) that portrayed Occupy Wall Street demonstrators as well-off cosmopolitans who exploit non-workers.

Today, those media use that canard against the ascendant socialist left. City Journal (Fall/20), the flagship publication of the conservative Manhattan Institute, described DSA as “a party of young, well-to-do neighborhood newcomers, sometimes dubbed gentrifiers.” The “Trumpism without Trump” journal  American Affairs (Summer/20) dismissed Alexandria Ocasio-Cortez’s 2018 congressional primary upset victory, saying without citation that it was fueled by a “few thousand Twitter-conscious gentrifiers who populate Astoria,” although the magazine provides no citation backing up this claim.

The centrist press, establishment Democrats and the right have different aims, but accusations of socialist gentrification bring them together. City Journal and American Affairs wage a cultural war, evoking a right-wing vision in which socialism exists only in universities, where the children of the elite are taught to hate America and Christianity, while Johnny Lunchbox in Anytown, USA, puts his faith in a marketplace that’s anchored in God and country.

For Jeffries, the Times, and City and State, meanwhile, fighting socialism is a complex defense of the role real estate titans play in mainstream Democratic politics. The real estate industry is one of the most powerful and influential business sectors in New York City; insiders joke that it is to the city as oil is to Texas. One of DSA’s most universal features, meanwhile, is its stance against landlords and rising rents. 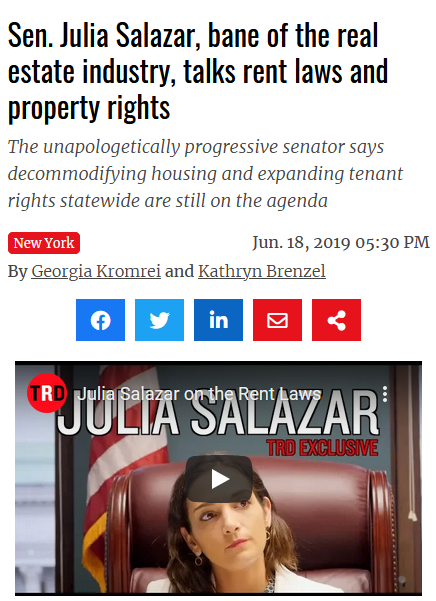 The Real Deal (6/18/19), organ of the real-estate industry, sees DSA members not as gentrifiers but as rent-control advocates.

Zohran Mamdani was a “foreclosure prevention housing counselor” before his election to state assembly this year, according to his official biography. The Real Deal (6/18/19), the city’s main real estate journal, called Julia Salazar, a socialist state senator from Brooklyn, the “bane of the real estate industry” for her tenant advocacy, particularly her push to make it harder for many landlords to evict tenants (Gothamist, 2/11/20). “On every single issue, where gentrification plays a role, NYC DSA has been staunchly fighting against gentrification,” Salazar told FAIR in a phone interview.

Meanwhile, the New York Post (9/21/20) warned its readers that socialists aim to “‘cancel’ rent,” in order to force landlords to “give up their properties and ‘exit the market,’” allowing the state to “acquire the properties and convert them to public housing.” The paper, owned by the right-wing Murdoch family, worried that the rise of socialist lawmakers would undermine “the real estate industry’s already diminished clout in the Democrat-run state legislature.”

As Salazar said, the idea that DSA members are at the same time both tools and enemies of real estate interests is a “frustrating” and “confounding” contradiction, and it often stems from the fact that many DSA-backed candidates do represent gentrifying districts. Salazar’s north Brooklyn district, for instance, is synonymous with the post-hipster luxury housing boom. “They don’t understand correlation versus causation,” Salazar said of the media and political critics, adding, “In communities that have been experiencing gentrification, DSA is by no means driving the gentrification.”

But Salazar senses something far more cynical: an attempt by DSA’s opponents to inoculate working-class communities against socialism where DSA isn’t yet powerful, miseducating voters by smearing the organization before DSA can make political inroads in those places. “It’s advantageous” to the political establishment, she said, to advance a narrative in places like southeast Queens or East New York, working-class communities that don’t have much DSA presence, that says, “The socialists are gentrifiers and they’re your enemy.”

For Salazar, the gentrifier accusations against DSA from corporate media—and from political opponents who get uncritically quoted in the media—are just a part of politics, but she laments that the establishment political machine may use these remarks to get “Black and brown and working-class voters to vote against their interests,” resulting in “more gentrification and displacement and suffering for those communities.” She added, “That’s what bothers me, because elections do have consequences.”