WATCH: Real estate developers find a deadly booby trap that could kill someone inside derelict home | JOE is the voice of Irish people at home and abroad

In terms of the most iconic introductions in cinema, you’ll be hard pressed to beat the first time that we all met Indiana Jones in Raiders of the Lost Ark. Brazen, daring, and utterly fearless, Harrison Ford’s best character – sorry Han Solo fans – is incredibly persistent in his pursuit of the Chachapoyan Fertility Idol.

Bet you never knew that was that ‘golden thing’s’ official name, eh?

Anyway, as he steps across the terrifying terrain, our hero has to contend with deadly darts, a chasm that has spikes at the bottom, and that famous bolder as he goes in pursuit of treasure.

Damn Alfred Molina’s character for betraying Indy… but at least he got his comeuppance.

However, booby traps are usually confined to films like Indiana Jones, The Goonies, and the James Bond saga, but a derelict house in Philadelphia was housing a fatal surprise that could have killed someone.

As reported with the PhillyVoice, Ekrem Uysaler, sales executive for ABC Capital Investments, was doing some prep work on a house in south west Philadelphia.

After scoping out the property with his team, they discovered that the staircase was completely covered in broken glass. After further inspection, they discovered what appeared to be a trip-wire on the stairs.

After ensuring that everyone was safe and clear of the staircase, one of the men triggered the booby trap. As you can see below, a single crutch with a long knife attached to it was propelled down the stairs.

Uysaler said that: “Luckily, we stopped one of our guys before he walked into the wire. The whole thing was pretty crazy.”

The video was posted to Facebook by property manager Ari Miller and before you watch it, please note that some of the language is strong.

Congratulations! You have found the white Cadbury Creme Egg! Click here for your chance to win a massive Cadbury Hamper 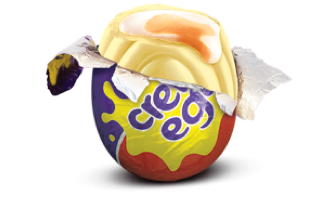 This week: Eamon Dunphy: How he learned to stop worrying, the rise of Anglophobia and why RTE didn’t want him